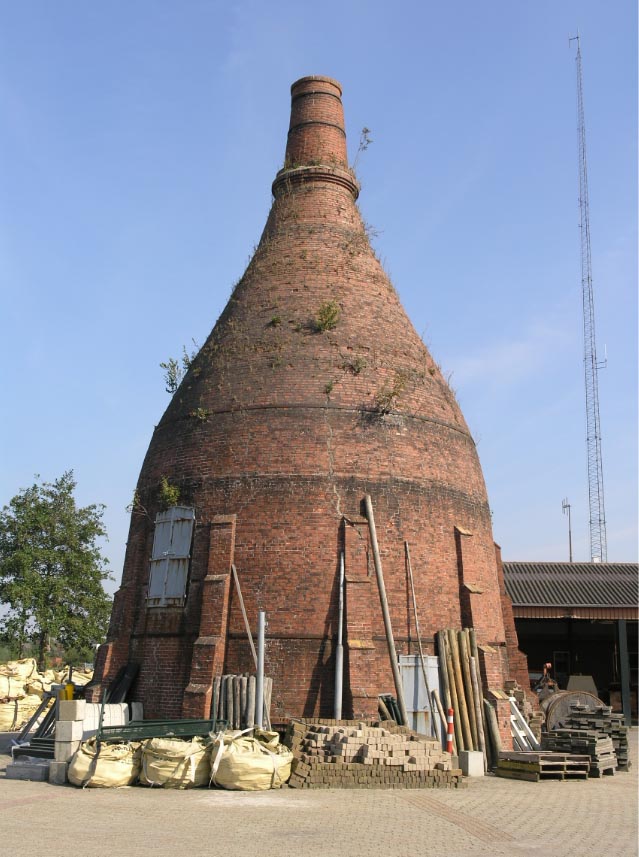 The following images will probably be familiar to you. This is probably because over the past decade those lime kilns have been declared objects of cultural interest. Lime kilns have played a fundamental role throughout the ages in the development of the professions of Art, crafts and architecture. Those constructions are all the more interesting since they are structurally different according to their eras, geographic and climatic factors

Irreplaceable since the beginning, used by men of the Antiquity, limestone is an extraordinary stone which, when subjected to fire, loses some of its properties to acquire more precious ones. Unlike some materials, there has been no revolution or innovation capable of completely replacing it.

How is limestone formed?

Occupying the third place of the Mohs scale, limestone mineral is formed by an accumulation of calcium and constitutes more than 10% of all the sedimentary rocks present on our planet. Shells and skeletons having a high-calcium composition, after erosion, form a sediment which will pass through a hardening and compaction process called lithification responsible for the origin of limestone.

The abundance of skeletons and shells enables limestone to be easily formed in several diversified environments, especially in freshwater and seawater where the vast majority is found in the depths where vegetation abounds.

The use of calcium oxide, commonly known as lime, is one of the oldest building conglomerates. Traces of its use date back to the Toltec constructions, to that of the Teotihuacán pyramids, but also to the Mayan cities.

Properties and uses of lime.

Lime is a biodegradable and breathable material which requires passing through several complex processes for each stage of its transformation. Once the calcination of the white stone carried out, it will be distinguished as the lime from the hard and compact stone, useful in construction, and the lime from more the porous stone, better for whitewash.

After calcination, quicklime is obtained and will be hydrated to subsequently give hydrated lime. The latter will be used to make mortars or pastes for construction and restoration.

Although in the today world of the restoration of wall paintings cement is mainly used (limestone and clay binder), lime, as main ingredient, plays again a fundamental role and gains more and more users because of its properties for wallcovering and its affinity with traditional construction and decoration materials and techniques. According to some of our restorers, the vast majority of problems related to the use of lime comes from the lack of knowledge of its use.

This essential ingredient can only be handled by professionals with a strong expertise in this field. To properly use lime, it is necessary to set up a large and structured programme, since the maturation processes of the materials must be respected in order to optimize their properties.

For its use in restoration, it is necessary to before study the properties of local raw materials in laboratory and to test their evolution and temporal behavior regarding the work that has to be performed.

In the field of architecture, on the European territory, lime is widely used as a mortar and is used to put construction elements together such as bricks, stones, breeze-blocks, etc. It is also used to fill the remaining spaces between blocks and for wallcovering …

As mentioned previously, its versatility enables it to be used on different types of agglomerated materials. Thanks to this and the transmission from generation to generation of its techniques done for thousands of years, great differences in terms of finishing touch is found throughout Europe. Those differences give rise to a vernacular architecture that must be protected, even though in some cases innovation must be made by mixing traditional technique with more modern elements in order to meet the needs of families.

In some rural areas, especially in the south of Europe, can still be found many traditional houses where the traditional technique of lime plastering is still the main one.

The rendering applied to a wall acts as a protective coating. This process is carried out in 3 steps in order to give to the wall an aspect of flatness. While the first two layers project the mortar onto the wall, the last is a thinner layer to correct any irregularity.

For the last layer, there are many coating techniques that stand out from each other.

Among the many stucco techniques, the Venetian stucco stands out. This wallcovering technique is composed of slaked lime paste, powdered marble, natural pigments and plaster.

Venetian stucco is the most known stucco technique. It was popularised in the 15th century and is currently used worldwide.

Lime stucco was popularised during the hegemony of the Roman Empire and similar techniques were already practiced in ancient Greece and Egypt. This boom was mainly due to the increasing use of new materials such as bricks. It was also during this same period of ancient Rome that lime was used as a decorative element, being both a wall covering and a form of representation of art in architecture, where their deepest desires, their heroic exploits, as well as their darkest fears were represented.

The Baroque was a hereditary style of the mannerist skepticism, reflected as a feeling of fatality and drama among the writers of its time. During this period, the artistic representations were very decorative, full and rich in ornaments.
This artistic movement revealed the illusionist use of optical effects. Throughout the Baroque, architects paid a particular attention to the use of stucco as main decorative element for the vast majority of their buildings.

Italian Art shows the importance of stucco. Giovanni Paolo Pannini (1691 – 1765), painter, architect and landscape designer, was one of the painters who showed the great importance of this type of architectural decoration. Art is a reflection of society.

In Latvia we also find extraordinary stucco usage as in this symbolic modernist building in Riga, work of Mikhail Einsenstein (1867-1920).

Lime allows the walls to breathe, so that the air inside the houses is renewed and also prevents the formation of moisture in the walls. With a fairly high pH (12.5), this mineral has a microbicidal and antiparasitic function, which prevents the appearance of insects and bacteria in buildings.

In Spain, mostly in the south, lime is still used as white paint, since this type of paint is effective to fight against high temperatures and is perfectly suited to arid climates. Thanks to the popularisation of the use of lime, we can today enjoy as characteristic places as those shown in this image. (Photo – Ubrique, Cádiz, Andalucía.)

This other image shows a second example of lime-painted villages in the Greek Santorini archipelago, where mineral powders like iron were also used to obtain different colours.

The natural colours are from animal, vegetal or mineral origin. The most common colours in the use of lime are ochre, umber, burnt umber, red ochre and Verona green. Each may vary depending on the mixture and the percentage of oxides in the dissolution.

Monochrome or polychrome is strongly linked to the variety of raw materials present around cities. Before, there was a strong relation between the colours of the houses and the commercial capacity of the cities around them, this is why it is not surprising to see so many colourful architectural landscapes on the coastal cities.

As for colours, it is important to keep in mind that the process of spraying oxides (natural dyes) must be carried out with care, since the more a pigment is sprayed, the more the result will be optimal. In some regions and countries such as the United Kingdom, pig blood was added to the mixture to give it a pink colour. This colour is still widely used outside homes, mainly in rural areas. However, excess of blood in the mixture would compromise the strength of the lime binder agent due to its high content of iron oxide.

Among our craftsmen and restorers who use lime

The “Venetian Terrazzo” technique has been created from the reuse of waste from the processing of marble and other lime conglomerate stones. This technique dates back to ancient Greece, where the floors were made of river stones mixed with lime or clay, although it was also popular in Venice where it was used in palaces of this time.

Soils made with this technique are economical and take advantage of the properties of the use of lime. This type of floor is today becoming popular again and its use continues to be spread due to its versatile character in terms of design and shades.

Passionate and professional of lime, MOSÈ FELTRACCO explains each step in the process of creating terracotta floors. He reports that the properties of using lime mortars in the ground are distinguished by their reduction in CO2 emissions, but also by their breathable and hygroscopic nature which makes them natural humidity regulators inside buildings.

In the pouring phase, the mixture is spread over the entire surface by pressing the aggregates with a special instrument called “battipalo”, then the surface is levelled with a specific tool called “stagia”.

This phase requires careful consideration during the pressure stage, during which the air that could be created during the formation of the mixture will be eliminated to avoid possible cracks in the soil.

The “sowing” phase is important, because it allows us to determine the colours and artistic effects sought. To respect tradition, this phase is done by hand, randomly sowing the aggregates. Then we move on to the final levelling of the aggregates: the grout phase.

Before the grout phase, a physico-chemical study of a sample of the old soil, generally taken along the walls where people did not walk, enables to know its original composition. This makes it possible to perfectly reconstitute the mixture made up of natural earth and plaster with boiled and crude linseed oil and. This floor assembly phase is done by hand without interruption in time until its end. Adapted and specific artisanal tools are used on its non-flat surfaces.

The sources of information offered by our traditions are rich and uncountable. It is a process of evolution of techniques that goes back to the beginning of time until today, offering different solutions which adapt regarding each culture and each geographic location. Therefore, it is our responsibility to better promote and to shed light on the importance of the use of materials such as lime.

We must keep in mind that our traditional and local economy needs a big boost after the negligence it has suffered from during those last decades.

Resorting to the use of lime encourages and supports craftsmen and other professionals, medium or small businesses, specialising in this technique, and preserves ancestral know-how. This traditional technique is also a good investment for health, since the use of lime prevents the development and proliferation of fungi and acarid. In addition, contrary to general opinion, the cost of this technique is more affordable than that of many contemporary techniques as it involves less energy expenditure and is, therefore, more suitable for the respect and preservation of the environment.