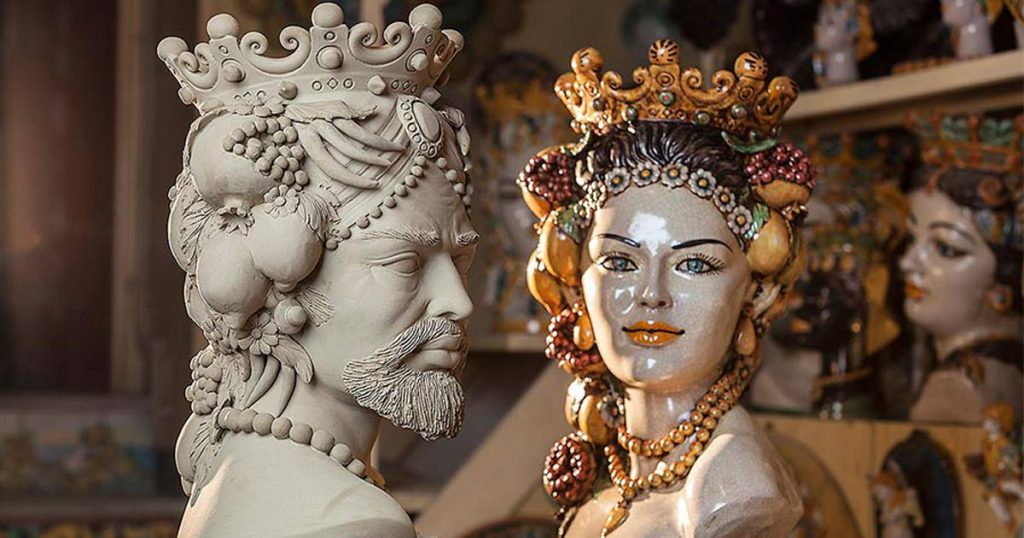 Have you ever wondered what these head-shaped vases that stand out among traditional Sicilian craftworks represent? Legend tells us that they are the distant memory of a love affair that ended in tragedy…

The legend dates to the Arab domination in Sicily, which left an important imprint on culture, gastronomy, language, and folklore. In fact, the so-called ‘teste di Moro’ (Moor’s heads), precious and colorful Sicilian handmade ceramics, are a clear example of this. But what do these ceramics have to do with Arab domination? Certainly, the dark skin and the Middle Eastern features, but what lies behind the beauty is the ancient legend from which they originate.

The legend of the Sicilian Teste di Moro

Legend tells that in the city of Palermo, particularly in the Arab neighborhood al-Hâlisah (today known as ‘Kalsa’), a young girl lived around the X century. The girl used to spend her days inside her sumptuous palace, taking care of her plants and beautiful flowers. One day, a charming young Moor passed under the girl’s balcony. An exchange of glances was enough to trigger love. Unfortunately, however, the girl did not know that the Moor she had fallen in love with had a wife and children in the distant lands of the East, where he would soon return. The young girl, blinded by love and jealousy, waited until nightfall, and while the Moor was sleeping, she cut off his head so that she could keep it with her forever. From the head, she made a vase where she sowed and watered plants and flowers with her tears. Passers-by, seeing how the plants grew luxuriantly in that particular vase, made in the shape of the Moor’s head, decided to commission handmade terracotta vases in the same shape.

This is the origin of the Sicilian Moorhead craft tradition, which has nourished the creative minds of many Sicilian craftsmen, especially those from the city of Caltagirone.

Caltagirone is the kingdom of the master craftsmen of Sicilian ceramics. The city’s vocation for this art is inscribed in its Arabic originated name , “Qal’at al Ghiran”, which means “Fortress of the Vases”. (Fonte:https://ceramicheverus.com/it/blog/news/caltagirone-la-rocca-dei-vasi). The history of ceramics in Caltagirone goes back thousands of years, where craftsmen and artists have preserved tradition while interpreting it in an original way with different shapes and colors.

The Arab influence is present in the decoration of the famous ceramics. They taught the technique of glazing and pottery to Caltagirone craftsmen, who then used it before it became popular in the rest of Italy.

Later, the art of majolica, popular in Muslim and Norman times, spread and was refined over time, showing great originality while preserving Moorish motifs and the traditional colors of blue, green, and golden yellow. Many of these vases were, and still are, made with geometric or plant motifs, graffiti or painted in green or manganese. Their bottoms are decorated with figures from the animal and plant world, such as lemons, buds, doves, and bunches of grapes.

Teste di Moro are a symbol of the traditional ceramics of the city of Caltagirone, which is a UNESCO World Heritage Site for its historical, cultural, and artistic riches. These ceramics are made all over Sicily where master craftsmen make them entirely by hand, then glaze and paint them according to local traditions.

What are the steps involved in making these particular vases?

The first phase of the realization of these vases with anthropomorphic shapes consists in the working of majolica, creating different shapes through the technique of turning and modeling. The second phase instead, which precedes the cooking, is the drying. It takes place by letting the pieces expel the water contained in the clay to be able to then proceed to the cooking phase for a duration of about 13 hours. After the first baking, all the pieces are glazed acquiring a white coloration. Once glazed, the decorators occupy the stage. The decoration is a very important phase, where imagination and tradition come together to create wonderful objects. To finish, we move on to the second stage of baking where the vase acquires luster and brightness enhancing colors and shapes.

Sicily is a great land, rich of tradition, art, and passion. We invite you to read more about this traditional craft. To know more : https://www.ceramichesofia.it/lavorazione-della-ceramica