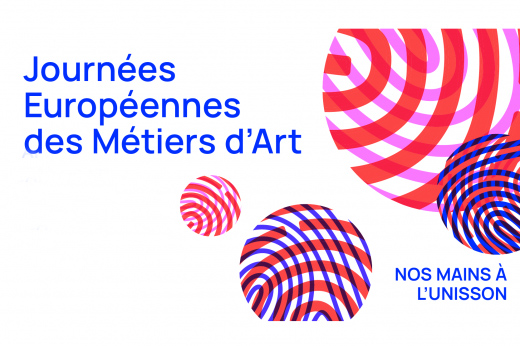 From March 28th to April 3rd

The European Artistic Crafts Days (EACD) is an opportunity for all craftspeople, training schools and museums around Europe to open their doors to the public and outdoor demonstrations.

The Artistic Crafts Days (Journées des métriers d’art) were created in 2002, upon the request of the French government. They became the European Artictic Crafts Days (EACD) in 2012 and have been held in 18 different countries at best. They were launched by the French Savoir-Faire Institute (Institut National des Métiers d’Art (INMA)) and have become the first international event dedicated to crafts.

The last two year, due to Pandemic, the European Artistic Crafts Days have had to adapt and move away from their true nature. But this year, the Institut National des Métiers d’Art (INMA) wishes to focus on human encounters, exchanges and savoir-faire demonstrations, rebuilding bridges between craftsmen and women and their audience.

In 2022 will take place the sixteenth edition of the EACD, from March 28th to April 3rd, INMA will set the pace, as an orchestra conductor would. This year’s theme “Our hands in unison”, will be revolving around notions like humankind, gatherings and togetherness, as well as being European.

During the 2022 European Artistic Crafts Days, on every land and in every language, craftspeople will share their passion with the same voice and same hands, in unison.

FIND THE EACD IN OTHER COUNTRIES HERE