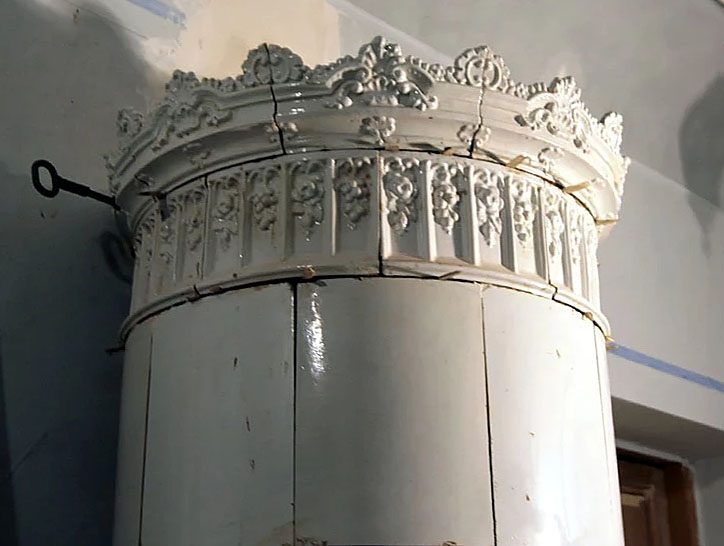 They were thought to be relegated forever to our childhood memories instead, the wood stoves still have good days in front of them. Sensitivity to the environment and to a way of life closer to nature led us to rediscover them in their traditional version but, also in some cases, in a more contemporary one.

The creation of radiant heat is a very old technique that has evolved throughout the centuries depending on the regions of Europe, their climate, the types of clays available locally and the artistic currents.

The principle of these stoves is quite simple, the heat produced by combustion in a closed chamber circulates inside the stove through a labyrinth made with refractory bricks. This heat is transmitted to enamelled ceramic tiles that cover the stove. Earthenware accumulates and releases the heat in a progressive manner by limiting the number of woods used. The heat released is soft, pleasant and especially long-lasting.

In addition to these great qualities, let’s add the beauty and elegance of the stove that becomes a beautifully integrated interior design element and a place for family reunion and conviviality. 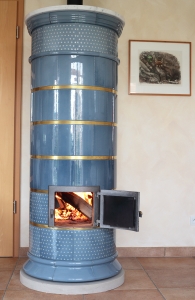 The design of earthenware stoves in different parts of Europe is obviously influenced by local resources and artistic trends. The Swedish Kagelugn, which marked the Gustavian era, is different from the “Stufa a Olle” from Trentino (northern Italy), the mittel-European Kachelofen or the Alsatian wood stove.

Christian Van Parys, ceramist in Belgium, specializes in the restoration and construction of Scandinavian stoves. In his kiln, built with his own hands, he started to make earthenware tiles using a clay reserve found in his area, which enabled him to face more serenely the cost of starting his business.

Sébastien Koehler, in Alsace (France), does not only restore old stoves, he also collects dozens of them. His most beautiful pieces will be presented in a “living museum”, which will open in Sélestat in 2020 in the former Poudrière de Vauban. A Merovingian stove will be created entirely on site, under the eyes of the visitors, who will be able to get to know its secrets.

Keeping an eye on the past, Sébastien also looks to the future and to innovation. To satisfy those who want to admire the fire burning, he discovered with his father a way to integrate a small glass door in old stoves.

HOW IS A WOOD STOVE BUILT?C

The challenge of the stove maker lies mainly in the mastery of the material and its fire resistance. Here are the main steps in creating a traditional earthenware stove:

The first step is the preparation of the clay which is mixed with chalk, dolomite or silica. The colour and type of clay depends on the extraction sites. Precision in the dosage is essential to ensure that the tiles have the necessary resistance against cracks and peeling of the enamel layer. Water is added to this mixture and the clay is then dried on plasterboard. As soon as it gets good consistency, it is stamped or cast in plaster molds which are made according to the shape that will take the stove.

The tiles are cooked a first time then enamelled and, depending on the case, painted. A second cooking will fix the enamel and the colours.

The construction of the stove is done on site. The tiles are carefully assembled around the refractory brick ducts. They are held by wire and raw clay. Stoves are usually removable.

In addition to the knowledge of the materials and the manufacturing process the stove maker must be extremely patient. He must accept the risk involved in the use of fire. Indeed, many tiles are lost or distorted during the first cooking.

Some craftsmen, such as Andrea Magnolini in Italy, make terra cruda stoves. The principle is the same as for earthenware stoves, the refractory stones inside transmit heat to a coating which is a highly compacted mixture based on clay (about 75%), straw (about 20%) and water (about 5%) all dried in the open air. Pigments can be added to confer a specific colour.

The “terra cruda” is indeed very efficient in terms of heat accumulation and diffusion. It is easily available, ecological and natural. On the other hand, this type of stove will not be removable.

The performance of a wood stove allows you to transform the wood, an easily available resource, in heat, 15 kg of wood can be enough to warm you for an entire day.

The amount of CO2 emitted by combustion in a wood stove is the same as that produced by the decomposition of the same wood in nature. A wood stove on average releases around 75% of the heat created. It is therefore efficient, economic and ecological.

Softwoods such as pine or fir are preferable to start a fire because they will ignite quickly and burn fast, rapidly raising the temperature in the combustion chamber. Therefore, it will be better to use hardwood such as oak and cherry which burn slower and produce less smoke, while providing more heat than softwoods. All types of firewood should be dried outdoors, preferably in a sheltered place – for at least six months, or even a year after splitting