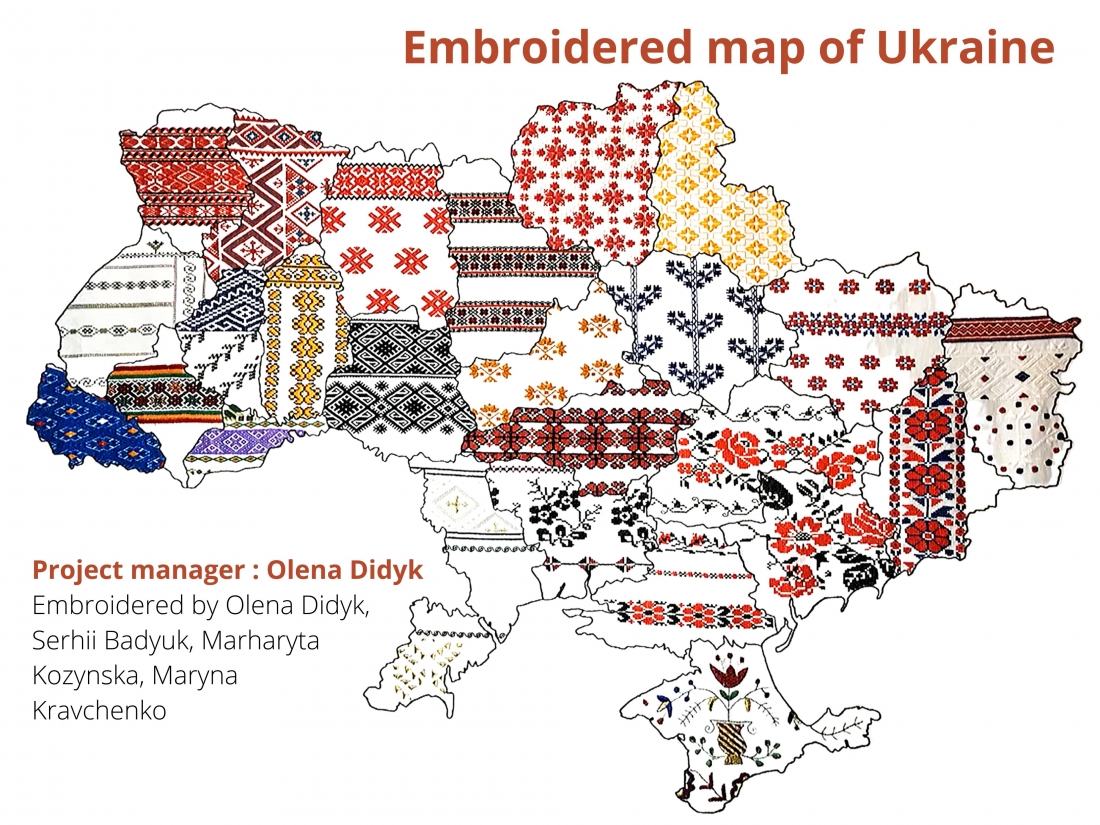 The Ukrainian folk costume combines utilitarianism and beauty. This traditional costume has changed throughout generations due to the influence of historical, social and cultural factors. In the middle of 20th century, folk costume incorporated embroidery designs and was made out of linen, hemp and wool. Clothes-making was at that time the main economic activity of Ukrainians. Each pattern of the traditional clothing suggested the ethnical background, the social status and the marital situation of the person. Today, we can find a large number of Ukrainian embroidered clothes stored in different museums of the United States of America and Canada due to the mass migration of Ukrainians in the 19th and early 20th century.

During the second world war, people buried their clothes in the ground in order to preserve the priceless national heritage of embroidery from the Soviet and the German occupiers. After the end of world war, the traditional embroidered clothes became a manifestation of belonging to the Ukrainian nation worn by writers, politicians, activists, and journalists. Traditional Ukrainian embroidery became a source of inspiration for many international luxurious brands such as: Gucci, Dolce & Gabbana, Jean-Paul Gaultier, John Galliano and many others.

Homestead is the result of the collaboration of the Ukrainian San Antonio Foundation with the National Museum of Architecture and Folk Life of Ukraine, in Kyiv. This museum preserves furniture, handicrafts, clothes, shoes, hairdos, jewelry and ornaments, in order to preserve the memory of Ukrainian culture and its cultural heritage. Thanks to this collaboration and extensive research work, Homestead was able to precisely match the architecture, furniture and objects with the clothing of each major region of Ukraine and could reproduce the atmosphere by involving the today’s inhabitants as main actors. Through a series of photographs of these reconstructions, the project educates us on the cultural diversity and customs of the different regions of Ukraine. The photographs present traditional Ukrainian clothing, architectural styles, hairstyles and accessories typical of a specific territory and period, between the end of the 19th and the beginning of the 20th century. Homestead is a one-of-a-kind project for its informative dimension. Indeed, its objective is to make known the cultural richness of Ukraine to the Ukrainians still present on the territory, to those who now belong to the diaspora but also to a much wider public.

The images created, enriched with very detailed descriptions, are the subject of postcards, intended to be sold to finance exhibitions in other countries.

The World Vyshyvanka Day is an international holiday dedicated to preserving an embroidered shirt know as Vyshyvanka, as a material and spiritual heritage of the Ukrainian people.

The World Vyshyvanka Day was born as a small student flash mob action in 2006 in Chernivtsi. Every third Thursday of May Ukrainians, friends of Ukraine from more than 100 countries, wear vyshyvankas to work, universities, schools and even kindergartens.

In Ukraine this day became a real holiday of national unity, and an attention to the embroidered shirt (vyshyvanka) as part of the cultural heritage that had to be revived and popularized after many decades of decadence.

The organization has implemented more than 70 large-scale projects in Ukraine and abroad in the field of cultural heritage. These are flashmobs, exhibitions, lectures, documentaries, festivals, installation of monuments and street names. Such a variety of event formats were created for the wider citizens engagement and awareness-raising.

The initiative brings together not only professionals working in the field of cultural heritage, but also actualizes attention to it and promotes cohesion through support from international influential organizations. In particular, the European Union, OSCE, UNDP, NATO, G7.

Ukrainian vyshyvanka (embroidered shirt) is an unique world-wide high-art phenomenon in the galaxy of the national dress of Europeans. It features a variety of embroidery techniques (over 200), styles and ornamentations. Embroidered shirt is not only a traditional part of the Ukrainian wardrobe, but a national symbol of the struggle for independence, a symbol of spirit invincibility and a symbol of hope and love.

It is beyond doubt that before manufactures and factories were set up, many folks had decorated their clothes with embroidery. Ukrainians managed to preserve embroidered shirts throughout centuries as a special value and an enduring genetic code of the nation.

Ukrainians have worn embroidered shirts at all times, even when they lacked their state, were forbidden to speak their language or gripped tightly by totalitarian soviet regimes. It is perhaps why modern Ukrainians treat vyshyvanka so delicately and solemnly.

Vyshyvanka has found a special place in Ukrainian`s clothes, hearts, and family traditions.

Today, an embroidered shirt is not only a symbol of Ukrainians’ independence and self-identity but also a symbol of foreigners’ sympathy with Ukraine. By wearing it, foreign politicians, cultural activists and other nationals show interest to Ukrainian culture and, for their part, they emphasize the integrity of Ukraine’s European past, present and future.

In the historical retrospective, the Ukrainian traditional embroidered shirt (vyshyvanka) in the 1980s and 1990s, despite the attention of the cultural elite and dissidents, in a broad context experienced a real impairment: in large cities it was treated like an old trash, and in villages it could be used as a mop, a doormat, a blanket for pets. An old embroidered shirt (vyshyvanka), which is about 100 years old, could be bartered for one piece of soap or powder. There was complete depreciation and marginalization of cultural heritage and its attitude as a relic of the past.

The gap in understanding the importance of cultural heritage between narrow cultural elites and wide segments of the population deepened. The surge in national revival took place after the Orange Revolution in 2004. However, only a wave of public interest could not ensure a sustainable revival.

In 2006 The World Vyshyvanka Day was born as a small student flash mob action at the Faculty of History, Political Science and International Relations of Yuriy Fedkovych Chernivtsi National University. The author of the idea and the founder of the holiday was a student Lesia Voroniuk. The impetus for the implementation of the idea was an embroidered shirt of Igor Zhytariuk, who regularly wore it to university, like some other students. Lesia Voroniuk offered to her groupmates and other students to choose a single day for them to wear their vyshyvankas.

In 2011, the event  was included in the Ukrainian Book of Records due to the number of people wearing vyshyvankas at the same time in one place (more that 4000 in central square in Chernivtsi). Subsequently, this record was several times higher in other cities of Ukraine.

The founders of the holiday (Lesia Voroniuk, Oleksandr Tkachuk, Mykhailo Pavliuk, Serhii Bostan, Oksana Dobrianska) scaled the holiday every year, attracting, first of all, the support of students throughout the country. It was students and young people who were the driving force of the initiative, which began to involve the public.

In 2015, NGO World Vyshyvanka Day was founded, which operates throughout the year and implements projects in Ukraine and abroad. The NGO closely cooperates with the Ministry of Foreign Affairs of Ukraine and annually organizes a number of cultural diplomacy events together with embassies and foreign partners.