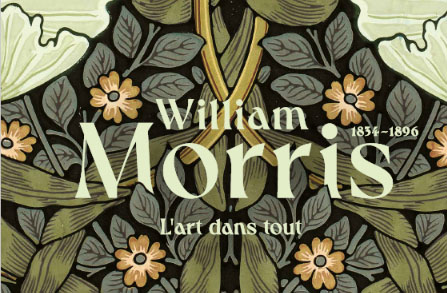 Following on from English Conversation: The Bloomsbury Group, a popular exhibition held between 21 November 2009 and 28 February 2010, La Piscine museum continues to explore the close links between artists, artisans and intellectuals in Great Britain by highlighting the theories and work of William Morris and his fundamental contribution to the recognition of applied arts.

Spanning nearly 600 square metres, the exhibition showcases around one hundred artworks – paintings, drawings, furniture and textiles – from public collections in the UK, particularly Tate Britain and the Victoria and Albert Museum, but also from French public collections, mainly those held at the Musée d’Orsay.

Never exhibited in France, the visionary work of William Morris had a huge impact on his time. He theorised a social, political, ecological and artistic utopia and laid the foundations for what would later become known as Arts & Crafts. This movement championed art in everything and for everyone, in response to the industrialisation and dehumanisation of time-honoured techniques.

A textile designer, writer, poet, painter, illustrator, architect, manufacturer, social activist, ecologist and an incredible theoretician, Morris developed a complex body of work and campaigned for a new form of recognition for art and crafts, but also the artists and craftsman, in late 19th century Victorian England. He is famous for his literary works, socialist political commitment, publishing work and creations in the decorative arts.

In reaction to the industrial revolution which marked the Victorian era, Morris underlined the importance of all different artforms – painting, architecture, drawing, crafts and literature, etc. His aim was to restore aesthetic qualities to objects, even the most everyday, using manual skills to produce beautiful items for all social classes and promoting the value of the rarest forms of expertise, in opposition to the prosaic banality of the industrial world. His formal and historic research into the Celtic culture and the Middle Ages provided inspiration for him and his artist friends, many of whom are also present in the exhibition. These include Dante Gabriel Rossetti, Edward Burne-Jones, William Holman Hunt and John Everett Millais, among others, who belonged to the Pre-Raphaelite movement that flourished around him. The new ethical organisation of art, theorised by Ruskin and implemented by Morris, gave his work a social and ecological dimension which is still perfectly relevant today: experimenting with community studios, a return to the country in craft retreats, companies distributing profits to the workers, paying attention to conditions under which objects are manufactured, respecting the dignity of those manufacturing the objects and the belief that “beauty” helps give meaning to our existence.

With this exhibition, La Piscine offers visitors an opportunity to explore the world of William Morris. Tapestries, hangings, furniture, paintings and drawings will be displayed in a voluntarily immersive exhibition design by Cédric Guerlus.