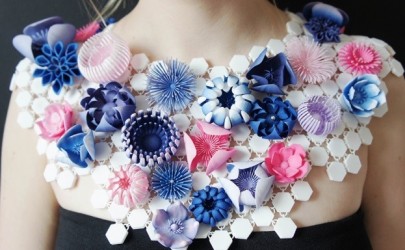 To celebrate spring and coincide with the Chelsea Flower Show, the Chelsea Fringe and London Craft Week, CAA launches Bloomin’ Jewels, a selling exhibition of specially commissioned contemporary jewellery based on the floral.

This is the first exhibition on botanical motifs in contemporary jewellery in the UK.

22 jewellers have created completely new jewellery celebrating the floral, using a range of media from precious metals and gemstones to polyester and 3d printed nylon, and working with both historical and cutting edge techniques. Some like Silvia Weidenbach, Rebecca Wilkes and Xenia Walschikow have developed their own fantastical flowers, with no known antecedents or relations to normal blooms, but which pick up on their qualities of colour and exuberance. Several makers including Gill Galloway-Whitehead and Jonathan Boyd have drawn inspiration from the symbolism of the humble weed that peaks out from a crack in the pavement to become a symbol of resilience, continuity and survival.

The makers were invited to handle the collections at the Museum of London and in the company of Geoffrey Munn, jewellery expert on the Antiques Road Show and Wartski’s, jewellers by appointment to Her Majesty the Queen. to study the Wartski collection. The jewellers were so entranced by the en tremblant jewellery, gemstones set in delicate floral sprays on tiny springs that respond to the movements of the wearer, popular in the 19th century, that a number of jewellers have made their own 21st century versions. Like Sonia Cheadle’s seasonal diamond brooches, Kelvin Birk’s crushed gemstone brooches and circlet and Kayo Saito’s textile flowers. All respond to the wearers’ breathing and movement.

Makes also studied the symbolism of flowers, with Christine Lalumia, design historian and executive director of CAA. Christine Lalumia gave a seminar about the history of floral symbolism in the decorative arts, affording jewellers an insight into a form of communication of which most were ignorant, but which for centuries was readily understood by the community at large. This inspired several makers like Anna Gordon to create new work with a symbolic resonance.

“Since the first of man’s ancestors used a bloom for self-adornment, botanical motifs have been a key feature of jewellery designs,” says Corinne Julius, journalist and curator, who guest curated the show. “However in the 1970s, studio jewellers became pre-occupied with ideas, rather than traditional concepts of beauty and preciousness. The floral was about prettification. It fell from favour and there it has remained. The idea behind Bloomin’ Jewels was to encourage or rather challenge, studio jewellers to look, perhaps for the first time, at how they might interpret the floral in contemporary ways.”

“I am delighted,” says Julius, “that so many jewellers agreed to look again at the floral, especially as several were chosen precisely because this is so outside their normal practice. I hoped that Bloomin’ Jewels would extend their practice and nudge them in new directions. All the jewellers have blossomed. Their works have given flowers a new place in the history of jewellery.”

Bloomin’ Jewels has been scheduled to coincide with the Chelsea Flower Show 2017 (23-27 May) and will be part of the Chelsea Fringe (20 May-4 June). The latter initiative celebrates the capital’s diverse gardens, green spaces, botanical and horticultural achievements, with a special focus on the experimental.

The exhibition is CAA’s main event for London Craft Week, which was established in 2015 to spotlight and celebrate crafts across all disciplines, whilst at the same time celebrating London’s rich history as a hothouse for making and creating.

All events will take place in the CAA gallery

Corinne Julius is an award-winning journalist, critic and freelance curator. She has written and broadcast across the applied arts and gardening and this exhibition combines her love and knowledge of both. As Guest Curator on ‘Bloomin Jewels’, Corinne has enriched the project with her passion for cutting-edge jewellery. She has a long-standing interest in contemporary jewellery and is extremely knowledgeable about materials, trends and current approaches to both design and making. Her understanding of the contemporary design world enables her to place this discipline in the wider context of decorative arts and design today. She is the Chair of the Visual Arts and Architecture Section of Critics’ Circle and she speaks frequently on silver and jewellery at many leading institutions. She curated Silver Speaks: Idea to Object at the V&A, which is on in the Silver Galleries until July 2017. She has also curated three critically acclaimed ‘Future Heritage’ exhibitions at Syon Park for Decorex, where she selects the best of contemporary British Craft.

Contemporary Applied Arts, or CAA, is known for its innovative and thought-provoking exhibitions and displays which is combined with a strong track record in providing educational outreach. It was established in 1948 to support and encourage the making of fine crafts in Britain – and to keep them firmly in the public eye. CAA is a membership organisation which boasts some of Britain’s most innovative and influential contemporary jewellers and our gallery in Bankside also shows a diverse and frequently-changing selection of one-off work, ranging from decorative to functional pieces and including ceramics, glass, furniture, metalwork, textiles, wood and paper.

The acanthus and laurel adorned Greek and Roman jewellery, vines scrolled across the Byzantine, clover, rose and lily blossomed on the Gothic, whilst Elizabethan and Jacobean chains, rings and earpieces were composed of tiny enamel and gem stone flowers. Complete cornucopia and garlands of flowers festooned Renaissance jewels, whilst laurel and oak sprays of rubies and diamonds were a feature of Napoleonic jewellery. The early 19th century saw more delicate botanical compositions in clusters of seed pearls, but by mid-century more ornate assemblages of diamonds, often in the form of tremblers became popular. By the end of the century the swopping exaggerated forms of Art Nouveau jewellery blossomed in extravagant floral decorations in enamel, horn and glass and in the 20th century Bakelite and early plastics provided accessible floriated jewellery.